Canoe or Kayak? It’s not about the boat.

Canoes and kayaks have developed from primitive water craft designed by indigenous people for a variety of uses including hunting, fishing, trading and even war.  The designs range from dugouts or wooden frames with animal skin stretched over them.  Kayaks have been more traditionally used as single person boats with an enclosed cockpit.  There use was probably more limited to colder regions of the northern hemisphere.  Canoes have been used more widely and traditionally can carry more people and bigger loads.

Both canoes and kayaks have developed over the years but essentially you sit in a kayak and paddle it with a double bladed paddle. If you use a single paddle then you are canoeing. 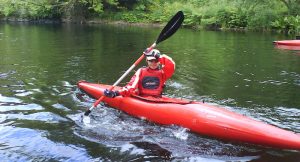 This is a kayak using a double paddle.

With canoes you generally kneel in it (although our canoes have seats) and are paddled with a single bladed paddle.  That’s pretty much it in a nutshell.